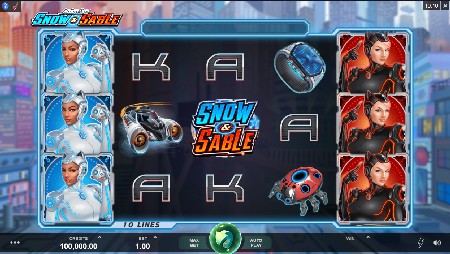 The game takes place in the fictional city of Aurora, amidst violet hues in the background, and includes some elegant and attractive symbols. Among the higher-value symbols are a transport vehicle, a robot ladybug, sunglasses with a built-in microphone, and a high-tech watch. The lower-level icons are K, Q, J, and A. Soundtrack and audio effects fit the theme very well.

The Snow and Sable Scatter is a symbol that has two functions. Firstly, if 3, 4 or 5 of these characters appear, you will be rewarded with up to €200, €1,000, or €10,000. At the same time, you can collect 10, 15, or 20 free spins. During the free spins, the first and fifth reels turn into an area of expanding game: Snow on one reel and Sable on the other. The free spins can also be retriggered with 2 or 3 scatters for 5 or 10 additional free spins.

The Action Ops: Snow and Sable Slot was developed for cell phones, tablets, and PC. All you need is an iOS or Android powered device.

Wild symbol: The slot features two game, Snow and Sable, which are used to fight crime. They replace all other symbols except the scatter and themselves. They can also form their own exclusive payline separately or together.

Free spins: You can unlock 10, 15, or 20 free spins with expanded snow and sable games on the first and fifth reel.