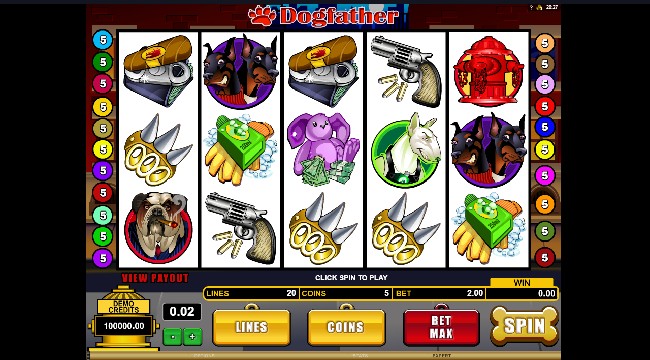 With a name like Dogfather, it is not difficult to make the funny connection to the successful crime movie “The Godfather” from 1972. And it’s exactly the same style that Microgaming developed this 5-reel slot with 1-20 variable paylines and payouts of up to 13,000 coins per payline!

First of all: Dogfather is not a very modern slot. In fact, the game was already released in October 2006 but still enjoys stable popularity, while other slots have already disappeared into oblivion. One of the reasons for this could be the amusing parallel of the symbols to the Godfather thriller. For example, the higher value symbols include four dog characters, while the lower value symbols include a pistol, a doll filled with dollar bills, a cigar cutter, brass knuckles, rubber gloves, and soap – no doubt to make the evidence disappear! While many of the audio effects are standard, we’ve found that winnings or triggered features activate additional audio effects that have a lot of charm.

The Dogfather slot has a payout percentage of 95.52% and can be played with stakes between €0.01 and €50. There is medium volatility and the – now quite old-fashioned game – can only be played on the PC.

The Dogfather Wild symbol has the ability to substitute for any symbol except the Scatter and Bonus symbols. It can also create its own payline with 2, 3, 4, or 5 symbols, which is rewarded with 13, 130, 1,300, or 13,000 coins. However, unlocking 13 free spins with x3 multiplier is possible using 3, 4, or 5 scatter symbols with Itchy da Flea on them. If this feature doesn’t appeal to you, there is also the Hydrant Scatter, which unlocks the Mark Your Territory bonus feature for sets of 3, 4, or 5 symbols. In addition you win 3,600, 4,500 or 5,300 coins. With this extra, 13 hydrants are displayed, which hide random bonus amounts and from which you can choose.

Wild symbol: The Dogfather Wild can substitute for any symbol except the Scatter and Bonus symbols and can reward players with up to 13,000 coins.

Bonus games: The bonus feature Mark Your Territory is unlocked with three or more water hydrant scatters and lets you choose from 13 hydrants to uncover hidden bonuses.