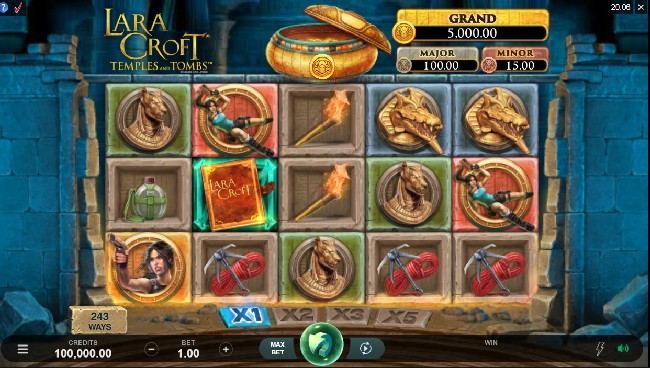 The slot is based on the adventures of the brave and beautiful title heroine of the popular video game and offers fantastic illustrations, which are particularly evident in the higher-quality symbols, including 4x Lara Croft in action, the crocodile god Sobek and the death god Anubis. The lower-grade symbols include rope, backpack, flashlight, and water canister. The audio effects even include comments by Lara herself, a mysterious melody, and other sounds related to the theme.

The wild symbol is the golden coin with scarab engraving, which can appear on the second, third, and fourth reels. It replaces all other symbols. Rolling Reels are used to collect Wilds on each Spin. After the feature is finished, there is a chance to win one of three staggered jackpots. Your chances of winning increase with the number of collected Wilds. The jackpot includes the Minor, Major, and Grand prizes. The Rolling Reels release winning symbols from the reels and the resulting gaps provide space for additional falling symbols. With each subsequent round, the multiplier increases during the basic game and the free spins. It can reach x5 in the basic game and up to x15 in the free spins. The free spins are triggered by three scatter symbols and include 8 spins.

The Lara Croft Temples and Tombs slot is designed for mobile and PC and you can pack the game on any Android or iOS powered device and start your adventurous mission.

Wild symbol: The wild symbol can appear on the middle three reels.