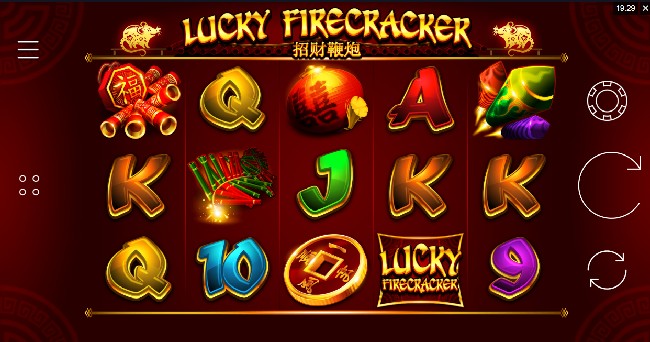 Fireworks were used both for New Year celebrations and to ward off evil spirits and were an ingenious invention from medieval China. Now Lucky Firecracker from Microgaming has taken up this popular theme on 5 reels with 243 winning opportunities and promises a bang for the buck up to €90,000!

Lucky Firecracker sparkles in bright red color, a symbol of good luck in Chinese culture, and contains five different firecracker symbols that light up the night sky. There are also six lower-value symbols, namely 9, 10, J, Q, K, and A. The audio effects combine traditional Chinese music with nostalgic sounds from older land-based slot machines, just like they are known from casinos.

We start the Chinese New Year with a number of features and start with the wild symbol, which only appears on the second and fourth reels. A traditional Chinese coin is the scatter symbol, which awards prizes of up to €250, €500, €2,500, or €25,000 for randomly placed symbols of 2, 3, 4, or 5 characters. If there are 3 or more Wilds, you also unlock 15 free spins with an x3 multiplier, which can also be retriggered. For a little more adrenaline, there is also the Gamble feature, which gives you a 50-50 chance to double your winnings.

The Lucky Firecracker Slot was developed for Android and iOS powered cell phones and tablets, but can also be played normally on the PC.

Wild symbol: The wild symbol can appear on the second and fourth reels and can substitute for all symbols except the scatter symbol.

Scatter symbol: The Chinese coin is the scatter and if two or more of these characters appear you will be rewarded with cash prizes.

Free spins: Three or more scatters unlock 15 free spins, which can also be retriggered within the feature. In addition, an x3 multiplier is applied to the winnings.

Gamble option: You can play the Gamble feature on a “double or nothing” basis.