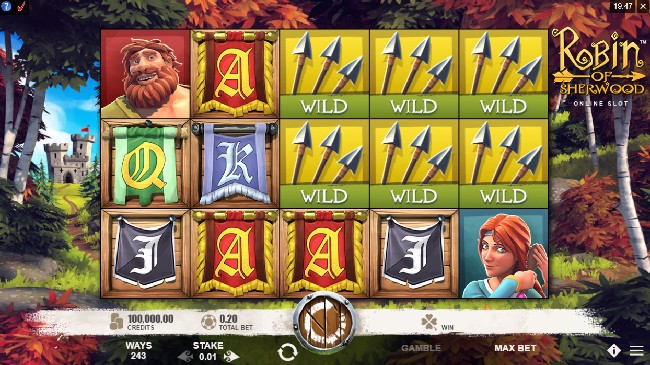 Robin of Sherwood by Microgaming is based on the heroic but lawless Robin Hood and his Merry Men gang. With the Wilds Turning feature, 10 free spins, and 243 winning opportunities, this 5-reel slot offers you the chance to win up to €2,000 per payline!

Microgaming is definitely not afraid of powerful and colorful illustrations, because in Sherwood Forest red and green leaves are blowing in the wind and you can see Nottingham Castle with the red flag in the distance. In addition to the music carefully selected for this game, you will also hear the sound of nature with birdsong and other authentic sounds. Higher ranking symbols are Robin Hood, the Sheriff of Nottingham, Maid Marian, Little John, and Brother Tuck. The poker symbols K, Q, J, and 10 function as lower-value symbols, as is often the case.

What would Robin Hood be without his bow and arrow? Well, the arrows in this game serve as a wild symbol that can replace any other symbol except the free spins. The Wild Turning feature is a so-called Wild expansion and is triggered randomly. Here, all subordinate Royal Flush card symbols on one or more reels are turned into Wilds. There is also a scatter symbol with the target, which appears on each reel and can unlock 10 free spins with three or more characters. Free spins cannot be re-triggered when they are active. One feature to spice up your free spins is the Royal Clearing feature, which eliminates the lowest playing card symbol on every second spin.

Finally, the Gamble Game gives you the opportunity to double your winnings for a round up to 5 times in a row if you choose correctly between two targets.

The Robin of Sherwood Slot can be played on cell phones, tablets, and PCs. If you happen to be outdoors right now, maybe even in Sherwood Forest, then you will enjoy the game best on your Android or iOS device.

Wild symbol: The wild symbol with the arrows can replace any other symbol in the game except the free spins symbol.

Free Spins: 10 free spins are unlocked with three or more scatter symbols. In free spin mode, the Royal Clearing feature clears the card symbol with the lowest value on every second spin.

Gamble option: Double your winnings with the Gamble Game, which can be triggered up to 5 times in a row after a winning round.

Bonus games: The Wild Turning feature is triggered randomly during your spins and turns one or more reels with Royal Flush symbols into Wilds.