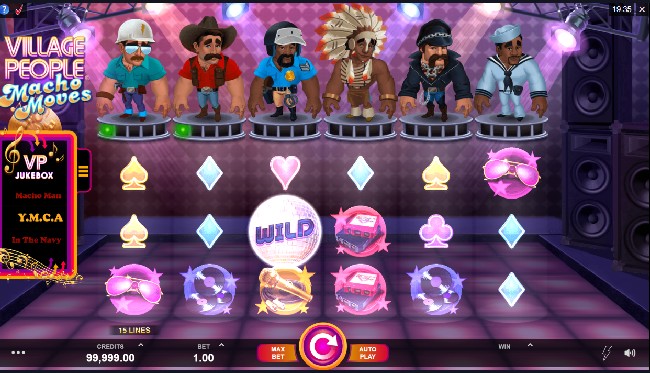 You don’t know the Village People? Then you are either still quite young or have spent your life as a hermit – because this cult band from the American disco movement has now even got its own slot thanks to Microgaming: Village People Macho Moves with 6 reels, 15 paylines, and a big top prize of €6,250 per line!

Village People Macho Moves uses cartoon-like graphics and on each reel a different one of the well-known characters dances along Construction worker, cowboy, policeman, Indian, sailor, biker As with the real band, it remains open whether the characters are extremely masculine or heterosexual. The symbols are divided into five high and four low characters. Included are a microphone, a cassette, a record, pink aviator glasses, and platform shoes. And of course, it would be a shame if the hits from back then weren’t included, so Microgaming simply added a VP Jukebox to play all the Village People classics.

If we now turn our attention to the ingenious features of the game, the first thing you notice is the disco ball, which together with the VP symbol represents the game. Both can appear everywhere and replace all other characters. You can also create your own pay lines and payout €125, €375, €1,250, or €6,250 on 3, 4, 5, or 6 symbols. In the VP Wild feature, a VP Wild also turns his two adjacent positions into Wilds. The VP Wild bar is located above each of the six reels and is used to collect special VP Wild tokens. When a bar reaches the number of five tokens, the Macho Moves Free Spins start and each reel offers a different special feature. The first to third reels use multipliers between x2 and x20 per spin, randomly wait with 2 to 12 Wilds or have 2 to 4 Wilds ready on each spin. Reels four to six, on the other hand, offer game reels that move with each spin, swap worthless game reels for valuable symbols or place 1 to 3 game reels that stay in place for the duration of free spins.

The Village People Macho Moves Slot is available in two versions both for playing the game from your desktop and as a mobile version for Android and iOS.

Wild symbol: This slot has two wild symbols that also form separate paylines. The VP Wild can also turn all other symbols on the reels into more Wild symbols when the VP Wild feature is active.

Free spins: When you fill the VP Wild bars above the reels, 5 free spins are unlocked, which then run as part of the Macho Moves feature. The feature offers random multipliers, randomly distributed wild, wild reels, wandering wild, symbol transformations, and sticky symbols.