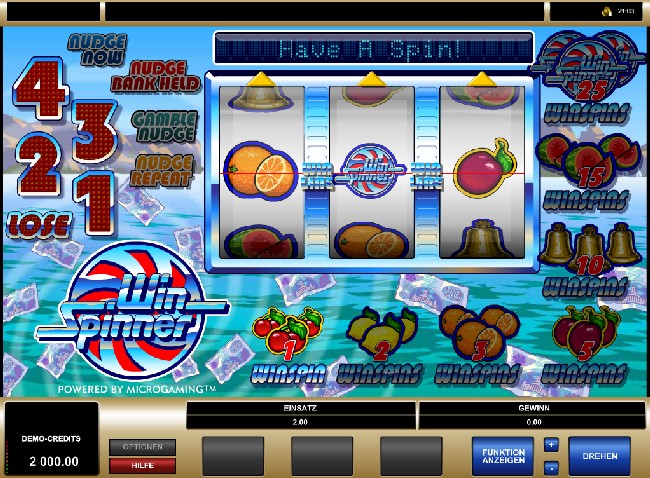 Win Spinner Slot from Microgaming is a classic 3-reel slot with 1 sporty payline where you can win up to x500 your total bet.

The game exudes a touch of luxury and the higher value symbols include a champagne bottle, cash, a yacht, a sports car, a private jet, and a jackpot. The graphics and audio effects are classic and typical for a traditional slot in this genre.

The slot offers a strong selection of features. One is the Nudge feature, which allows you to push up to four reels against each other to form a winning combination. It is also possible to play with just the current Nudge to collect more Nudges, the number of which is determined randomly. You can choose to either continue playing or collect your nudges.

The Hold feature is the next function that is randomly triggered and allows you to freeze one or more reels for the next spin. The Shifta feature is also triggered randomly and after a lost spin. In this case, one reel is frozen while the other two are pushed and shifted against each other until a successful payline is formed. Finally, the Let’em Spin feature can be unlocked randomly when two identical symbols are displayed and after all available nudges have been used. You will be rewarded with a winning combination.

The Win Spinner slot was not designed for tablets or cell phones, but you can still enjoy it from the comfort of your PC at home.

Gamble option: The slot allows you to play for a nudge and you also have the chance to collect a random number of additional nudges.